A veteran communicator who practiced print and digital journalism at some of the nation's top news media brands: The Wall Street Journal, the Chicago Tribune and NPR.

Will Mississippi's Black Democrats Save A Republican?

It's a rich irony that on the 50th anniversary of the Freedom Riders risking life and limb in Mississippi to help African-Americans register to vote, black Democrats may decide which Republican wins Tuesday's runoff for the GOP Senate nomination. Then again, maybe they won't. A big unknown on the morning of the election is just how many African-American Democrats might actually visit polling places across party lines to vote for Sen.
NPR Link to Story

The Export-Import Bank, created by President Franklin Roosevelt in 1934 to boost U.S. exports during the Great Depression, needs its charter to be reauthorized by September's end if it is to continue providing loans to U.S. exporters and overseas companies. The bank has the support of House Majority Leader Eric Cantor, so it sounds like an easy vote.
NPR Link to Story

The jockeying for the 2016 Democratic presidential nomination is already shaping up to be nothing like the 2008 contest. Indeed, it doesn't even resemble a contest. It's not going too far out on a limb to say that, unlike six years ago, the nomination is Hillary Clinton's for the taking, if she wants it.
NPR Link to Story

Environmental Protection Agency Administrator Gina McCarthy during her announcement Monday of a plan to limit power plant greenhouse gases. Evan Vucci/AP hide caption. While many on the left embraced the Environmental Protection Agency's new rules to reduce coal-burning power plant carbon emissions by 30 percent by 2030, some red state Democrats couldn't put enough distance between themselves and the Obama administration.
NPR Link to Story

No Democratic Stampede From Shinseki Yet — But Stay Tuned

The good news for Veterans Affairs Secretary Eric Shinseki is that there isn't yet an outright stampede of Democrats away from him, even as some call for his resignation. Just last week, the retired four-star general caught up in the scandal over reports that dozens of vets died in Phoenix while awaiting VA care saw several Democratic Senate candidates and some sitting House members call for his resignation.
NPR Link to Story

The United States Senate ratcheted up the pressure on owner Daniel Snyder on Thursday after a letter — signed by half the Senate — was sent to NFL Commissioner Roger Goodell, asking him to use his authority to get the Washington Redskins to change a team name that many consider racist. Snyder has vowed to never change the name of one of the NFL's most historic franchises.
NPR Link to Story

It says something about Kentucky's Republican Senate primary that its most memorable aspect wasn't some fiery debate exchange between Sen. Mitch McConnell and challenger Matt Bevin, or any kind of clash like that. There was no debate. Instead, it was a weird viral Web video from the Senate minority leader's campaign that featured him smiling in different contexts.
NPR Link to Story

House Minority Leader Nancy Pelosi's decision to have Democrats participate on the House Benghazi select committee? A defensive move. Some of her Democrats had urged Pelosi to boycott the committee. In their view, to take part would be to play into the hands of House Republicans who want to use the ninth investigation of the September 2012 attack in Libya, which left four Americans dead, to rally conservatives for the midterm elections.
NPR Link to Story

The name "Benghazi" used to just inflame conservatives. Now it is demonstrating its power to outrage progressives as well, though for different reasons. To be precise, Democrats are angered not just by the House GOP's creation of a special committee to probe the 2012 terrorist attacks in Libya that left four Americans dead but by Republican in connection with the Benghazi probe.
NPR Link to Story

Here's a measure of Maryland's Democratic tilt: Even an epic failure in launching the state's health care website isn't enough to derail the political fortunes of the official responsible for it. The Affordable Care Act is that popular. Anthony Brown, who was assigned by Democratic Gov. Martin O'Malley in 2010 to oversee the health care law's rollout in Maryland, remains the Democratic front-runner in the June 24 primary.
NPR Link to Story

Green GOP Group Caught Between 'Rock And A Hard Place'

On Earth Day 2014, it wasn't easy being green in the Republican Party. Just ask Rob Sisson, president of ConservAmerica. ConservAmerica is a membership organization created in 1995 to keep the environmental spirit of GOP President Theodore Roosevelt alive in his party. Back then, the group was known as Republicans for Environmental Protection.
NPR Link to Story

If the jockeying before the 2016 presidential race is a game of political chess, the most powerful queen on the board would obviously be Hillary Clinton. So much of what will happen in 2016 hinges on Clinton's decision on whether to run, which she has said she'll announce by the end of this year. If the former secretary of state and New York senator enters the race, she reduces the space on the board for any competitors within her own party.
NPR Link to Story
View More Stories

An experienced, innovative journalist who deftly shifted from newsprint to digital, Frank has helped chronicle the story of our times. He’s had the chance to observe history in the making and explain it to a combined audience of millions.

From the Space Shuttle Challenger investigation to the first Democratic elections in South Africa, to the 9/11 terrorist attacks, the Microsoft antitrust trial, and the election of the U.S.’ first African-American president, Frank has witnessed and analyzed many of the defining events and trends of our era.

Omnivorously curious, Frank’s coverage of a wide array of topics during his career at The Wall Street Journal, the Chicago Tribune and NPR prove his versatility. Among them were science, health care, economics, immigration, higher education, demographics, urban affairs and politics. He also started the homeland security, technology and privacy beats as a correspondent in the Tribune’s Washington bureau.

As the Internet wave crashed over traditional media, Frank surfed it, creating what he dubbed The Swamp, an award-winning blog about Washington and national politics that became widely popular and imitated. Later, he co-created NPR’s news blog, “The Two-Way“, and anchored the network’s “It’s All Politics” blog, winner of a 2010 Webby “People’s Voice” award.

Frank believes his career has been at the core of what makes humans distinct from other creatures. Ants and bees form social networks, so that’s not unique. Rather, it’s our ability and passion to connect with others through stories. Everyone and every institution has a story to tell, a desire to get the word out.

Frank is married to NPR acting national editor Vickie Walton-James. They have two children and live outside Washington, D.C. He spends much of his spare time sitting in gyms watching his children compete in high school and AAU basketball and occasionally coaching. He also has been honored to serve for nearly a decade on the board of trustees of Dickinson College, his alma mater. 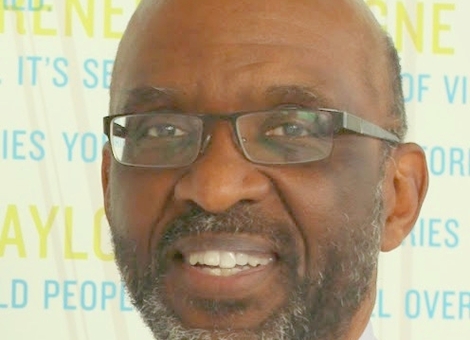